Soulash v1.0.9 is now live and it features Mushman, a new playable race designed by one of our Patrons - Thorvall, a Lizardman race buff, crafting improvements, auto pickup of shot arrows, and other fixes and improvements. 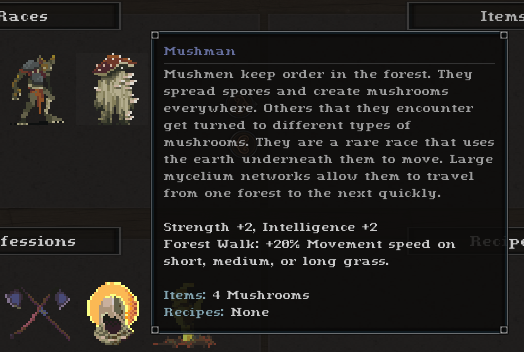 - New playable race - Mushman, designed by Thorvall!
- Added Clean Up action icon on the equipment screen when a liquid container is selected.
- Player character will pick up shot arrows automatically when walking in range.
- Added the "Max count" button to the crafting screen to fill in the count input considering the available resources.
- Added filter buttons to the crafting screen to easily filter craftables by item types.

- Lizardman now has his bonus movement speed while under Wet effect instead of only when walking on the water tiles.
- Repentance now scales off enemy intelligence and 300% of its base weapon damage instead of scaling from caster intelligence. Cooldown increased from 4 turns to 10.
- Potions are not of item type Usable instead of Resource.
- Slightly increased chance for Elven Villagers and Human Peasants to have Scissors.
- Destroying Bookcases can now provide Paper.

- Fixed missing background tiles under the fence on one of the regions.
- Fixed drunk liquid counter on the death screen.
- Fixed frames drop on AI archer getting stuck on attempting to attack the player.
- Gigantic Dwarf achievement correctly works when playing as a dwarf only.
- Fixed some dialogue typos.
- Fixed crash that happened when dragged corpse got butchered.
- Fixed a rare crash related to AI attempting to stash loot without a proper place in the area.
- Fixed a rare crash during the liquid changing tile (for example, blood tile changing to when exceeding a certain limit).
- It's no longer possible to drop the stack of items while splitting it, causing a crash.
- Fixed Cheat Console crash when attempting to spawn without providing an entity id.
- Fixed issue that sometimes caused teleportation to unload parts of the region nearby and caused a crash when attempting to teleport into that region.