Soulash patch v0.5.3 just went live with a new player-designed race - Lizardmen. The new race offers unique ravage corpse action that quickly consumes corpses leaving only bones and a bonus movement speed while traversing water - a very useful passive for players who prefer to run away from their enemies. See the full changelog below. 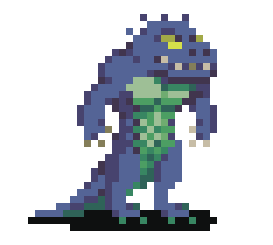 - Royal trees now have a unique description.
- Added messages about repair action results, indicating when there's not enough max durability for item repair.
- Statistics may no longer drop below 1 due to ability effects, dehydration, or starvation.

- Fixed veins spawn in Yelling Mountains.
- Diamonds of count 0 no longer drop from mining.
- Fixed rain falling in the animation editor.
- Fixed roof at region 33,25,2.
- Fixed Bard's song ability to work in AoE, and fixed its description.
- Attempting to use summon ability on a collidable spot will cancel the spell with the correct message instead of casting the spell without any effect.
- Fixed issue with stacked height objects causing different map tiles to be displaced.
- Cheat console teleport no longer crashes when inputting invalid position.
- Combat music now stops properly when only non-aggressive entities are nearby.
- Using production action on a stack of items outside inventory now correctly consumes a single stack.
- It's no longer possible to use production actions with a broken tool.
- Fixed death by starvation/dehydration.
- Drinking while dehydrated will no longer cause drinking over the limit.
- Long-distance travel is now possible in Cheat Console.
- Fixed crash related to disarming ability.
- Fixed attack animations in some of the bows.

If you would like to design your own piece of content in the core game of Soulash that will be introduced in August, you can do so by supporting us on Patreon, we're voting in just a couple of days.

Work on graphics mod progresses on schedule, while I still need to clear a long backlog of tasks before releasing v0.6. I should have more info next month about when to expect the next major patch. Until then, have fun eating mortals.

Hi! if you need a sound designer i can do it for free! i'm justr trying to get deep in the gamedeveloping as sound engineer and well... If you need one shit text me back!

Nice, blood for the blood god!