A big "minor" update this time around! This update brings a new location to the game, called The Maze. It's a secret location that I will let you find on your own. It's guarded by new types of enemies designed by one of our Patrons - Sinful, for the August content submission. If you can meet the challenge of finding it and beating the enemies, you will be rewarded with a pretty nice base of operations, with many crafting tables, and portals to distant places in the world.

Aside from this new location, we've added 2 new abilities, one for the Cultist and one for Inquisitor. Poachers also received some much-needed love - some of their abilities now leave ammunition used instead of consuming it. This should help with the ever-decreasing count of arrows and make these abilities more appealing to use.

In the background, the work continues toward the big v0.6 update that will bring other gods into play, things look very good there, and we hope to deliver with the next month's patch. Lots of modding changes this patch relate to the upcoming v0.6 update.

Below is the full changelog:

- Abilities Piercing shot, Lightning shot, Poison shot, and Holy shot now have a 90% chance to leave the ammo consumed as cost, making it the same recovery rate as regular shooting.
- Piercing shot has 4 turns cooldown.
- When a controlled entity makes the kill, the controller gets the credit on the death screen. This applies to summoned entities and entities temporarily controlled with spells.
- Silence heretic! is now an Inquisitor ability instead of Cultist.
- Freeze ability bumped from level 7 Cultist to level 10 Cultist, with increased damage.
- Summoning multiple entities now result in a single message.
- Charge now requires a target with health (animate or inanimate) at the end of its path.
- Deflection ability now lasts 5 seconds instead of 4 and has a 10 second cooldown.
- Last rites ability healing bumped from 10 - 30 to 20 - 40.
- Poison shot ability has a cooldown of 5 turns.
- Artifacts are no longer destroyed when durability drops to 0. Instead, they are unequipped same as other items.
- Changed Demon and Bone Wraith bonuses to be applied before ability effects and resistances.
- Paralyzing darts no longer require pile of bones.

- Fixed crash on game start when mods are selected that are not available in the game directory.
- Fixed crash when attempting to disarm an enemy without any weapon.
- Fixed crash on knocking enemy outside map bounds.
- Fixed rare crashes caused by charging or lunging at enemies.
- Fixed crash when starting a new game and enemy that dies at the same time as a player in the previous game wasn't processed yet.
- Fixed crash caused by murdering a tree.
- Fixed crash on player death caused by a trap.
- Fixed occasional crash when leaving the game to main menu and continuing from there.
- Fixed lag when AI attempts to walk into the unloaded region.
- Fixed occasional crashes on producing items.
- Blood no longer spills on Chasm.
- Improved performance in enemy-heavy areas like the Capital city.
- Updated Last rites ability description to indicate it consumes the targeted corpse for instant health regen.
- Item cost type now displays appropriately in the ability description and prevents casting when missing.
- Circle abilities are now calculated more accurately.
- Fixed and improved Poison Cloud ability animation to cover the whole area.
- Miriane, the Harpy Queen, now has a proper description. She's also wearing a crown instead of a diadem.
- Harpy nest has a proper description now.
- Resting places no longer display decimal values in tile descriptions. The same fix applies to the movement speed bonus on items.
- Fixed bonuses to move speed and attack speed coming from artifacts.
- Fixed message on casting Break Mind ability to indicate it reduces willpower and intelligence.
- Fixed road near Mensfield being covered in grass sometimes.
- Fixed Painless ability damage reduction bonus.
- Fixed some cases of input freeze after attempting to use the ability when it's not possible.
- Fixed damage calculation from Revenge ability.
- Fixed duration of poison, burn and bleed.
- Fixed disappearing items when salvaging and not picking up the resources due to low weight.
- Fixed wisps getting stuck attempting to pick up torches.
- When using an item in equipment that gives access to ability with full abilities bar, the last ability in the bar is replaced.

Thank you all for your amazing support, we're growing every day at a tremendous rate on Discord, Itch, Steam, Patreon, and Twitter, which sets us toward a great launch on Steam when we're ready with the graphics mod. Very exciting times ahead!

I grabbed this on Steam. Wanted to let you know I couldn't play the demo because the resolution was not setting correctly. It started at 1300x700ish, I switched to 1920x1080 and restarted. Pop up windows were off screen, making some of them partially unreadable, and the full GUI wasn't onscreen, like it was missing the edges.

Then I restarted again and it showed me a huge zoomed in section of the start screen and the mouse wouldn't select anything and I couldn't change the resolution because of that, so I can't play it.

The resolution that started, wasn't the full-screen size? There are some issues related to Windows app scaling. You can also set the resolution manually in <windows drive>:\Users\<your user>\AppData\Roaming\WizardsOfTheCode\Soulash\data\user_settings.json

The screen was full size, but the resolution was wrong, thanks for the JSON hint, I'll try that

I changed the resolution in the JSON file as suggested and set as borderless and it works, BUT there's a huge portion cut off for some reason. The red outline is the area I actually see (in the center). I can't see the hotbar, most of the stats, the mini-map, etc. 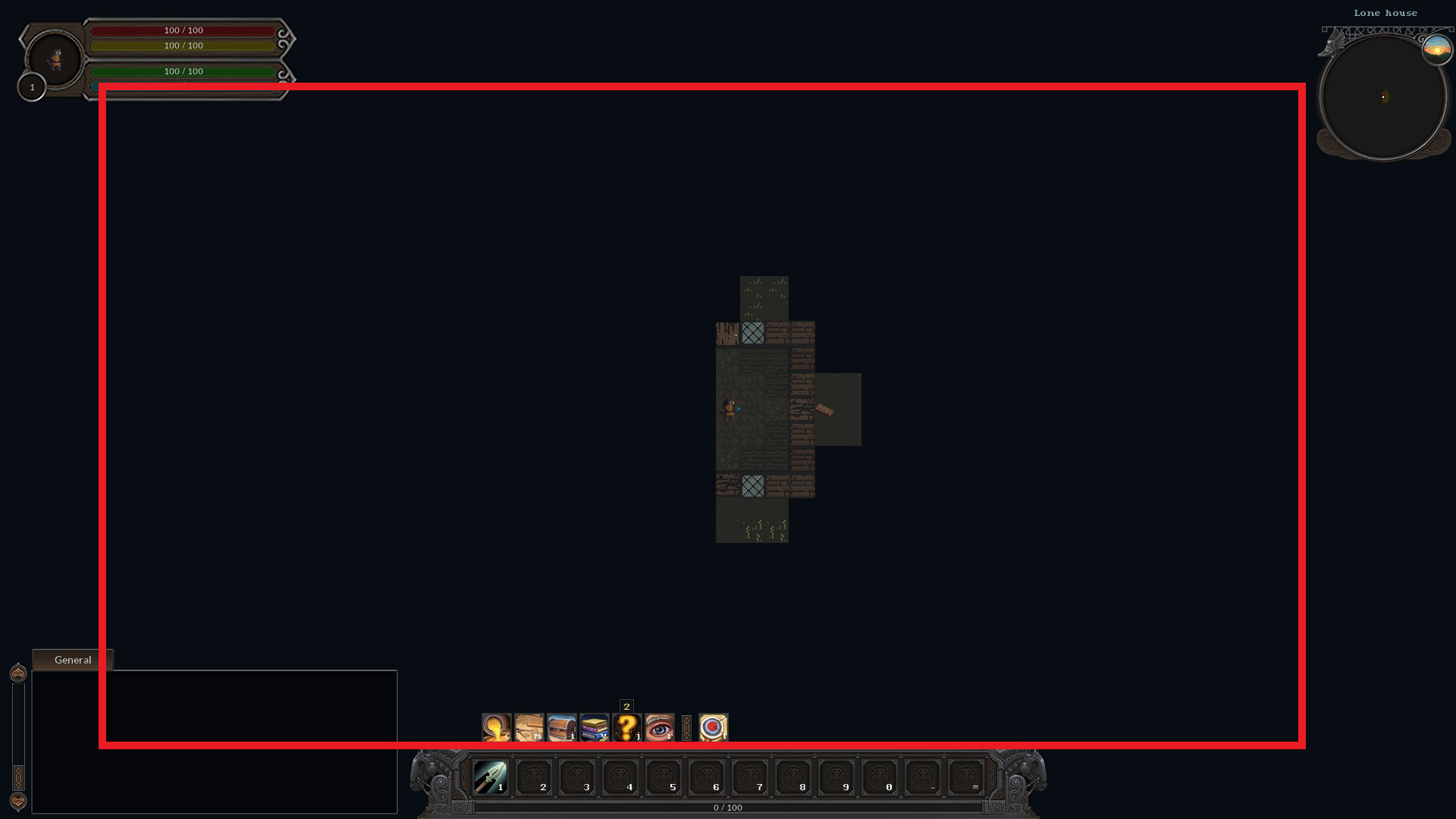 I'll look into this in code, as a workaround for now you can set any width and height in the json to match your screen