The time has come to face the gods that hold the world of Soulash in their grasp. In major patch v0.6, you will face up to 17 different gods that come after you to the mortal realm. Each and every one of them with a very powerful soul to steal, and an incredible effect on the world after they are gone. I will let you discover it on your own.

This patch also introduces a new playable race - Golem, designed by one of our Patrons, known to everyone on our discord channel - vitokin. Golems have a couple of special mechanics unique to them, as they don't sleep, they eat resources instead of regular food and they can break through inanimate objects like walls just by walking at them - but beware that they get damaged in the process, so watch out for the trees at night! 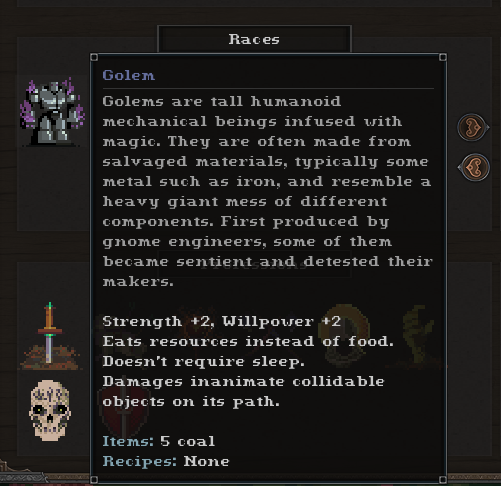 The third major addition is all missing Inquisitor abilities, putting him on par with the rest of the professions that also have abilities up to level 13. He's a very interesting character now, with some very strong powers, definitely worth a try.

Note: Due to how Soulash generates and preserves its worlds, some changes may not apply to the existing playthroughs and will only be available in the world generated with patch v0.6 applied.

Below is a full changelog:

- Fixed AI enemies casting spells and shooting arrows despite them losing sight of the player.
- Fixed missing tile glyph on unseen locations when AI entity or item was there.
- Minimum range ability property works with line targets.
- Fixed experience gain from some small entities.
- Fixed crash on game start when any AI entity has over 12 abilities.
- Fixed crash related to AI casting abilities.
- Fixed some issues related to the fullscreen resolution.
- Fixed bouncing shot hitting enemies behind a wall.
- Fixed "Placeholder" description of all elves in the game.
- Added missing Bushido ability animation and sound.
- Added missing sound for oil hit.
- Actions no longer activate when changing pages on the crafting screen on low resolution.
- Ravaging corpses progress no longer shows on corpse tooltips if you're not a lizardman.
- Items are properly deselected after leaving the equipment screen by pressing the escape button.
- Tutorial scrolls are properly reset after leaving the tutorial window.
- Hunting hounds are alive!
- Fixed issue with cooldown being displayed as 0.0 and blocking ability cast.
- Fixed duplicated repair button when the repair process is interrupted.
- Shooting and throwing properly recalculates the weight of equipment.
- Casting abilities properly recalculate the weight of equipment when items are consumed.
- Added missing sound when learning new recipe by using it in the backpack.
- Fixed stacking sounds.
- Bouncing shot and chain lightning won't go through walls anymore.
- Removed underground wire connection between doors that allowed opening any door by standing close to a different door.

- New component On Destruction allowing to introduce global scale changes to the world:

- Destroy certain types of entities globally.
- Replace certain types of entities with new ones.
- Permanent day / night.
- Make blood drinkable by everyone, but cause some damage.
- Disable hearing entities.
- Disable fatigue for everyone.
- Add new and change existing weather.
- Teleport player to a specific location in the world.
- Reduce the percentage of max durability from all items in the world.
- Infinite durability for crafted items.
- Learn abilities.
- Learn recipes.

Thank you all for your patience and support. There's one more major update required to introduce the endgame content, victory conditions, and graphics mod into the game before we can move to final polishing and release on Steam. We're going to continue releasing on our monthly schedule to introduce content from Patreon with updates to the mechanics, it looks like we might have another playable race next month, so stay tuned!