The year 2019 is coming to an end. It's a perfect time to look back and see how much Soulash grew over the last year of development and get excited over what is yet to come!

Most of you probably don't know, but I've released an article on my blog at the end of the previous year, describing how Soulash improved during a year of development. Can you imagine it was going to be a trading roguelike in 2018? I must have been mad. Developing games is very hard nowadays with an oversaturation of internet content, and I can't tell you how many times I wanted to throw Soulash out of the window. Looking at it now, I'm glad I was able to stick with it.

The first thing that I tackled in 2019 was GUI. I think the screen below will say more than a thousand words. 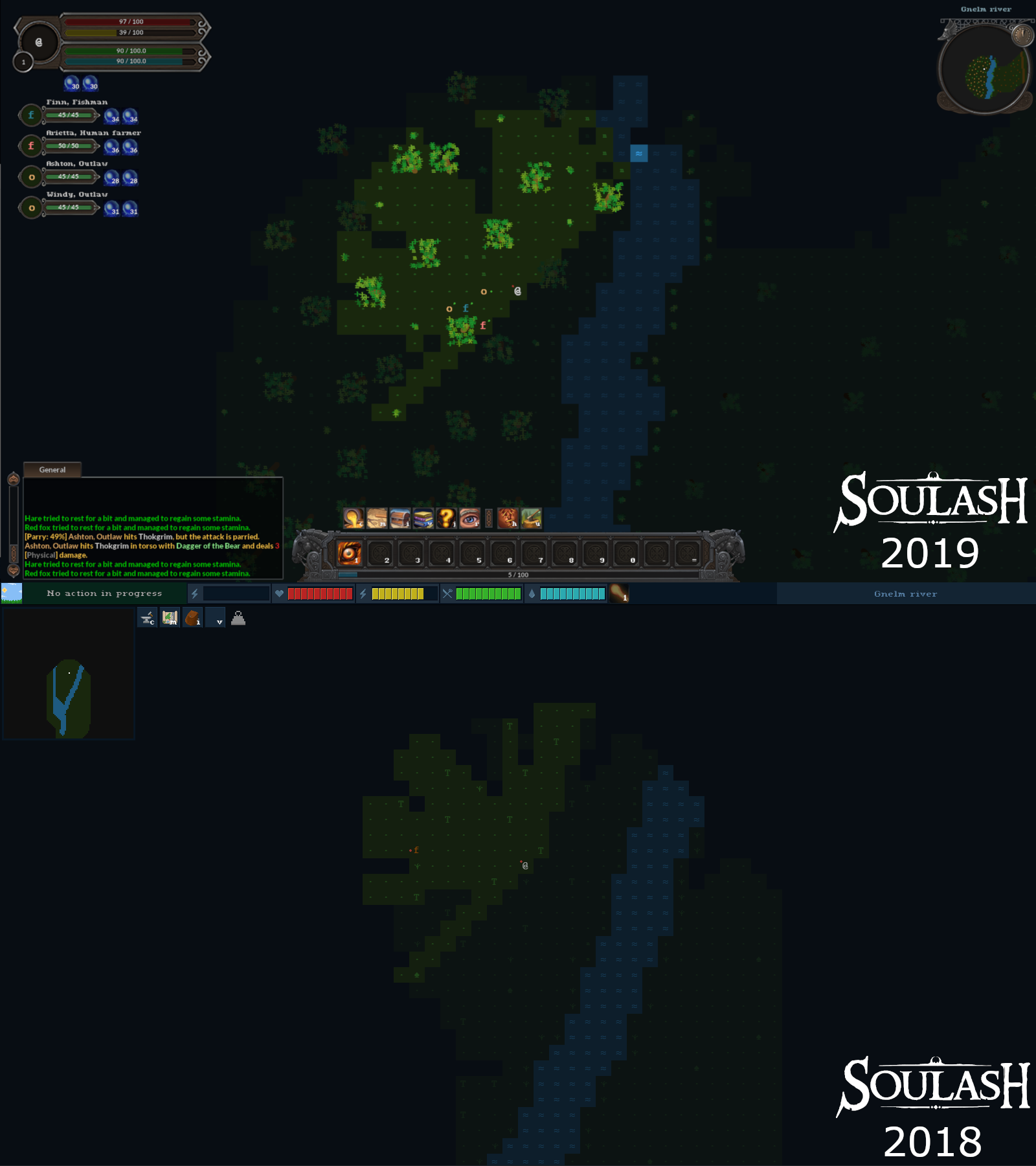 I've decided to go for a modern look. As more and more options became available, it was necessary to present them to the player in a clear way. I've added buttons and tooltips for every action available in a given situation, and I think I've made better use of the available screen by moving things around during GUI rewrite.

In May, I've released the first public demo of Soulash. It was a little over two years of work before I was able to get the game to that state, with the first 6 months spent on building the engine. The alpha v0.2 followed shortly with about 80 animated abilities and 500 different entities in the world.

In one of the minor patches, we got a place to mourn our fallen gods.

The world of Soulash changed and grew up to 170 regions without including the recently added alternative maps, which sums up to 696,320‬ tiles in the game. Last year, it was about 60 locations, and I only just started to build the vast Imperial Capital as the current endgame location. Now with introduction of Undying Desert in v0.3, we have two endgame bosses in the game.

A couple of months after the initial release, we had the first planned major update that introduced environmental destruction and the weather system. Wind also showed up in one of the minor patches, making the world feel a little bit less static.

We have blood now too!

And we finished the year with the release of the first three content editors for mods that allows for the creation of additional maps, entities, and spawn groups. The last patch was a leap toward the next major release v0.4 that will come in the first quarter of 2020 and introduce the ability and animation editors.

Overall, 2019 was a hectic year. I've managed to work on Soulash for 2000 hours, 33% more than 2018, which was mainly the result of the initial release, necessary bugfix support, and deadlines for major patches. The engine code grew from 8.3k lines to 11k, mostly from moving ECS code from project to engine and adding multiple GUI elements. The game codebase grew by 50%, from 40k lines to 60k this year. About half of the new code is related to content editors, and the other half were new features and systems introduced to the game. The numbers entirely skip the content because it's in the JSON files, and line numbers mean less than the number of new entities or region maps, for example.

Why bother with these numbers? To most people, they probably don't matter much, but many developers have a hard time estimating how much time or effort is required to create a game. I remember having such a problem when I first started. I like to document the data for my motivation, future estimations, and to help others compare their current progress to mine at a given time. It's easier to figure out how much more is needed to get somewhere if we have something to compare to.

To sum it up, from the moment I decided to create a game in C++ in March of 2017, I've spent 4800 hours to get Soulash to where it is today. The number covers all the time spent on the project, which includes marketing, support, business, building the engine, and everything else that was necessary.

Soulash, during this half a year after initial release, sold 263 copies on itch and is in 589 collections. Not a great result, but a lot of it relates to my poor marketing abilities. Soulash page on itch was viewed only 27.2k for the last half a year. In comparison, the best article I've published about writing readable code on my blog and announced on Reddit once was visited 103k times in total. It's tough to reach potential players for a roguelike game. That's the unfortunate reality of the games market these days. 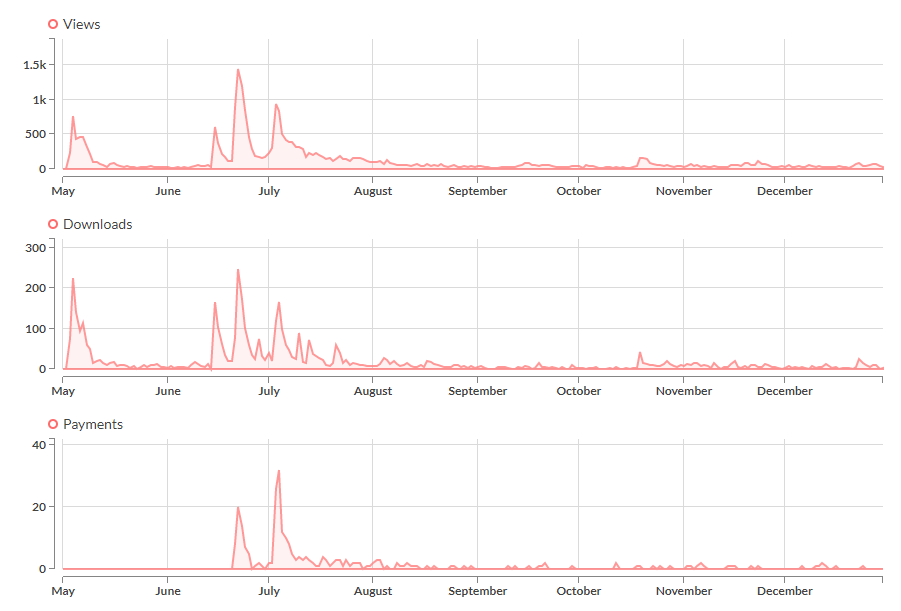 Let's leave the grim realism behind and move on to dreams and an optimistic future. Soulash is a labor of love afterall. Last half a year after the game release, I've listened to all your feedback and decided to wrap everything up into a workable plan. As you know, the next thing on the horizon is the v0.4 patch, which will finish the planned mod support for Soulash, after which I'll move on to the v0.5 marked as "Building".

The v0.5 patch, apart from the ability to create new entities in the world, will include a rework of the current profession system into a skill-based one. The main idea is to expand the available builds and allow more control over how we grow our characters. The skills system will include combat abilities like sword fighting, fire magic, shield mastery, as well as utility abilities like smithing, mining, woodcutting, or alchemy. I'll provide you more details as v0.4 is up and running, and I'll be able to focus entirely on the new system.

The last patch of 2020, v0.6, will focus on AI improvements like traversing multiple maps, AI actors having their own goals, allowing them to craft, build, and repair what you destroy. The primary purpose of this patch will be to make the world feel more alive, and with that, your decisions and actions much more impactful. This patch will also introduce the often requested limb system with a new action that will allow targeting specific parts of the body.

If everything goes well, 2020 will also see the release of Soulash early access on Steam. Expect it to come close or with the v0.5 version.

With the current plan as is, without any unexpected issues, my work in 2021 will focus on the endgame part of Soulash, with other gods and miracles, but we'll get to that later in 2020. Everything currently "on the list", as I like to say, will suffice for the next two years of significant patches and it will finish , and I can't wait to get the game there!

As always, thank you all for supporting the game by purchasing the alpha, spreading the word about Soulash, and leaving your valuable feedback. If you have ideas for improving the game, feedback, or need help, I'm available on our official discord or community boards.

That was an awesome read congrats this is certainly my favorite RL!!!

Congratulations on all the progress. Looking forward to seeing where Soulash goes in 2020!

Thanks Oref, I'm excited to get improvements rolling. ;)